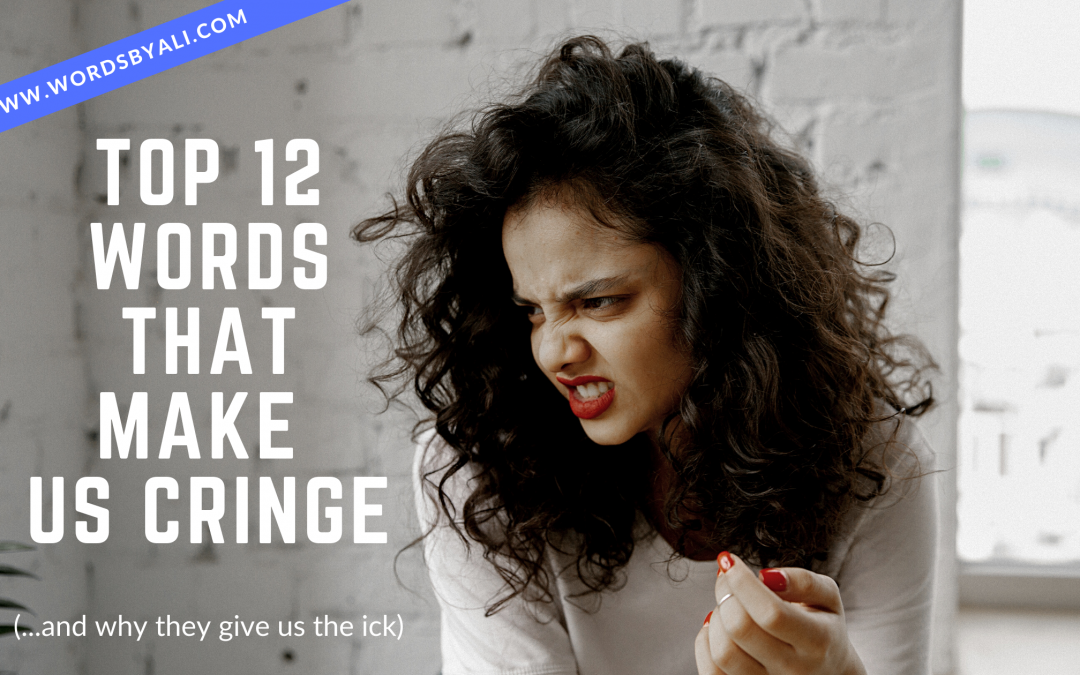 Why do some words make us cringe? Buzzfeed did a survey on the most cringeworthy words in the English language – and the results are unsurprising. But what are the most cringetastic words? And why do they give us the ick?

Top 12 words that make us cringe

Here are the top 12 words that make us cringe. Plus, see the percentage of people surveyed who found them cringeworthy (at this point I’ve already typed the word cringe so many times it has lost all meaning):

Coming in at number one, the word squirt was voted the cringiest word in the English language in Buzzfeed’s survey. Does this word make you feel queasy?

Surprisingly, the word moist was second in the grossest words poll. However, it was a very close second, making over half of the people surveyed cringe. Aversion to the word moist has spiralled in recent times, becoming a highly fashionable word to dislike.

Are you freaked out by the word moist?

An excellent example of onomatopoeia, squelch came in third in the cringe awards. The word squelch made 45% of the people polled feel gross. Does squelch have that effect on you, or doesn’t it bother you?

The word secrete is defined as a verb meaning “to produce or discharge”. But does it make you cringe when it’s secreted from someone else’s mouth? (ugh)

Vying for the position of the fifth cringiest word in the English language are panties and defecate. Do you think their place in the top 12 is justified?

The word flaccid came in midway in the survey of the words that make us cringe the most, putting off 33% of people. Why does this adjective, meaning soft or loosely hanging, make us feel so uneasy?

Yeast was voted the seventh most cringey word in Buzzfeed’s poll, disgusting 31% of people questioned. What is it about the word yeast that offends you? Or do you fail to see what the fuss is about?

29% of people surveyed agreed that chunk was a cringe-inducing word. Do you agree?

Another bodily-related word that makes us cringe is orifice. Does it have the same effect on you?

Coagulate, a verb that refers to a fluid changing to a solid or semi-solid state, came in at number 10 in the cringiest words in English. Do you agree with this position?

A smooth, oily substance used for medicinal purposes, ointment is having the opposite effect on many of us, as it’s making us feel worse when we hear it. Are you one of the 25% of people put off by the word ointment?

A narrow opening or fissure, especially in a rock or wall, the word crevice has earned its place in the top 12 words that make us cringe, offending a respectable 18% of people surveyed. Does the word crevice make you gag?

What is word aversion?

The feeling of cringe we experience when certain words are said or written is down to a psychological curiosity known as word aversion.

Word aversion is defined by Ohio linguistics professor Paul H. Thibodeau as “a feeling of intense, irrational distaste for the sound or sight of a particular word or phrase, not because its use is regarded as etymologically or logically or grammatically wrong, nor because it’s felt to be over-used or redundant or trendy or non-standard, but simply because the word itself somehow feels unpleasant or even disgusting.”

So, it’s not the same as getting annoyed because someone spells it “defiantly” or pronounces it “expresso”. Word aversion is more of an emotional reaction to a particular word, because of the negative way it makes us feel.

Professor Thibodeau’s study into why people hate the word moist revealed word aversion can happen for a number of possible reasons:

Do you fall into this category? And if so, do you hate the word moist and others listed in the top 12 most cringeworthy words?

Let me know your most loathed words on social media!